Lasso, a former banker who took office a year ago, promised to fight crime, revive an economy battered by coronavirus and attract investment – especially in oil and mining.

He has boosted economic recovery with a $1 billion COVID-19 vaccination program and his fiscal measures are reducing the high deficit, garnering praise from the International Monetary Fund.

But those achievements have been clouded by high levels of violence – which Lasso says is a response to his open fight against drug traffickers – prison riots which have killed hundreds, and vehement opposition in the National Assembly to his investment and security proposals.

The violence and legislative battles could spook investors, analysts said.

“There is a lot of interest in investing in Ecuador,” said Ramiro Crespo, president of financial consultancy Analytica Securities. “But obviously the fight in the assembly casts doubt on the stability of the presidency … investors will view the medium-term outlook with some distrust.”

Last month the assembly rejected a bill Lasso said would help him create two million jobs, and lawmakers warned they will reject a labor reform the government is still putting together.

Lasso has blamed lawmakers, including some who originally backed him and others close to former leftist President Rafael Correa, for blocking his efforts and has threatened to rule by decree.

But he called for renewal in a speech to the assembly on Tuesday.

“I want everyone here to know that I am willing to accomplish this pending work with everyone who wants to join,” Lasso told lawmakers. “If we are here, it is precisely to act in service of all the things that are above our differences.”

Opposition legislators, who allege Lasso is intent on privatizing public infrastructure and services, have also come in for criticism.

“It’s an opposition that is not constructive,” political analyst Arturo Moscoso said. “It’s not that Lasso isn’t accomplishing things, the political scenario is complicated.”

“What company is going to send their employees to a country with so much insecurity?” he added. “It doesn’t help at all for recovery.”

The government says it has received private investment commitments of some $5 billion and improved unemployment numbers despite inheriting disordered finances, debts, prison violence and institutional corruption.

“Lasso knows what is best for the country and needs time. In time things will get solved,” presidential advisor Diego Ordonez told Reuters. “The president wants to govern to solve employment and security problems, spend public resources in an efficient, orderly and above all honorable way.”

Many Ecuadoreans are frustrated with what they say is Lasso’s slowness, sending his credibility rating plummeting to 21% in the last week of April, according to pollster Perfiles de Opinion, from 68% when he took office.

“A year of unemployment, insecurity and deaths in the prisons, that’s what we’ve gotten,” said informally-employed secretary Viviana Palacios, 34, who lives in Guayaquil, where 1,100 police reinforcements were deployed in January amid a spate of violent deaths. “Lasso has proven his inability to carry the weight.”

About half of Ecuadoreans work informally, according to government figures, and 23% are considered underemployed.

“Since the vaccination plan there hasn’t been any other milestone achievement,” said Perfiles director Paulina Recalde. “The problems citizens were shouldering have gotten worse and insecurity has been exacerbated.”

Lasso has used emergency powers to restrict movement in provinces afflicted by the violence, deployed hundreds of soldiers and replaced security officials.

But his actions are too tepid, said former army intelligence director Mario Pazmino.

“There needs to be a total re-engineering of the intelligence system,” said Pazmino, who says border patrol efforts should expand to hit trans-national drug smuggling.

“Everyone is asking the state for security but the state isn’t paying attention.” 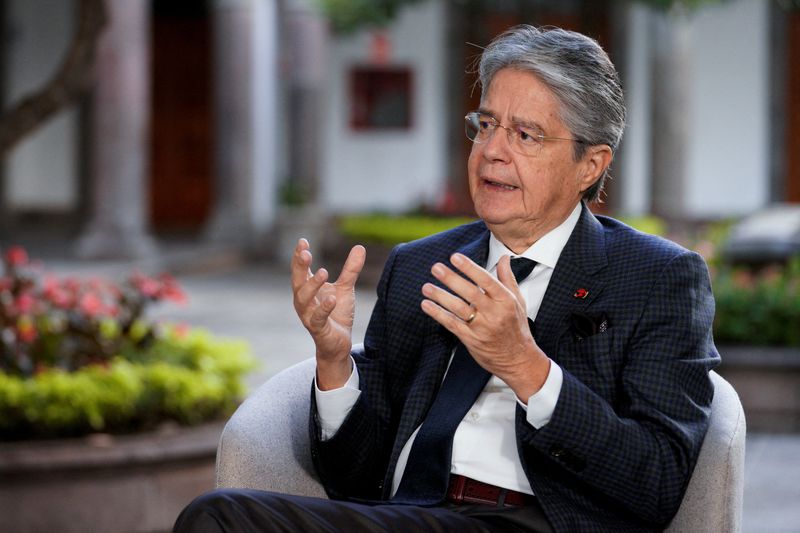